I told you if I had grown up in France, I would probably be one of those crazy cat ladies, who instead of collecting cats, would be an extreme collector of fèves. Alas, just look at me now with my first real Galette des Rois season officially winding down, not only did I manage to share seven cakes this month, approximately one every 4 days, I also found the fève four times, and got to be queen for the day, or at least the evening, once a week.

I consider this my first real Galette des Rois season, because prior to this January, I had no idea there was such a thing as a fabophile, or that there were entire websites and conventions devoted to this hobby. I come by this predilection honestly. My father, aka, the Grand Poobah, was a rabid collector of toys, and lived by the slogan, “The One with the Most Toys, Wins”. I think my maman would have been much happier if he only collected fèves. They take up a lot less room.

The Grand Poobah (and collector) with Kitcat, 1995

On top of the four fèves I won fair and square, I may also have purchased just a few (and been given some super tacky ones as a gift). 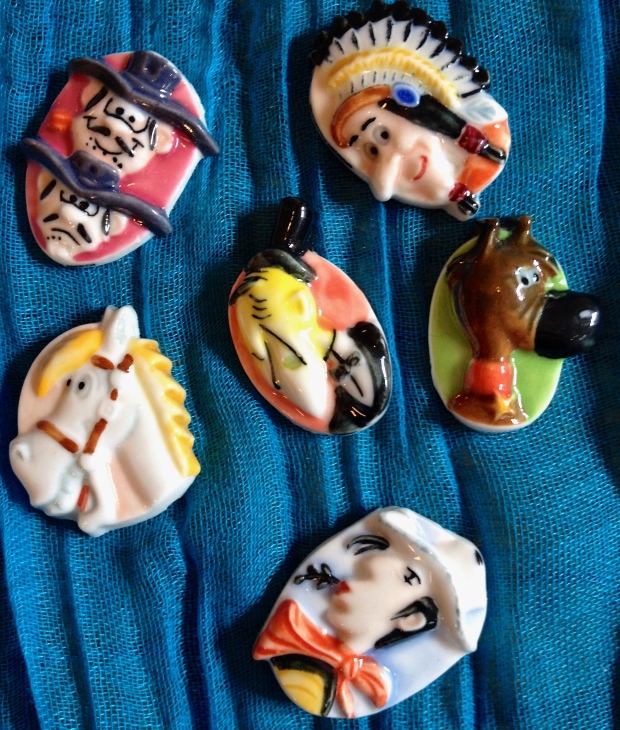 Okay. I’ll come clean. I spent 3 hours on a lovely, albeit, slightly fanatical, woman’s website exchanging franglaise messages about her collection. Obsessed with French pastries and pâtisseries, I finally decided on this delectable assortment of teeny tiny pastries. I paid a bit more than I should have, but my new friend, I reasoned, needed the money for a better set of fèves for herself.

They arrived tout de suite with a nice hand written note, and an extra surprise collection.

So, with one official fève season under my belt, I already have 20 little beans to use for my homemade Galette des Rois next year, as, bien sûr, I took another Galette des Rois cooking course last week.

This time we learned to make it with frangipane cream: almond cream plus pastry cream. It was the best galette I’ve had to date, better than the bakers, and a heck of a lot cheaper.

…the last Galette des Rois of the season…

The only snag with this fine homespun galette was that we forgot to put a fève in it. Drat! It’s decidedly likely I would have come away with one last treasure to add to my burgeoning collection.