The idea of spending a week in France imitating a hamster may sound bizarre, but the owner of the Villa Hamster in Nantes, France says there are a lot of people who are happily fulfilling a lifelong dream. Yes. Strange but true, according to the Huffington Post, the Villa Hamster is a hotel that allows guests to give up the daily stresses of being human and try out life as a hamster.

The Villa dates back to the 1700s, but has been modernized for the 21st century human-hamster hybrid, with cages for rooms and hay stacks instead of beds. You can also play the day away on a and human-sized running wheel. And guests even have the option of wearing little hamster hoodies!

As for food? Well, instead of the normal French cuisine items like coq au vin with a glass of Cabernet Sauvignon, the guests eat organic hamster grains served in little containers and sip water on all fours.

Things are going so well, in fact, that the owner is considering opening similar chateaus where people can live like dogs or cats. Meow… 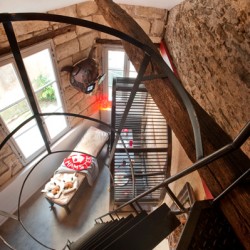