The French have a very unique brand of humor. Sometimes it annoys the heck out of me, sometimes it makes me stop and say, “What the f**k?!”, but most of the time it makes me smile and be glad to be able to experience absurdity from a different cultural perspective.

Yesterday at the Corrida de Noël was no exception. Humour à la française was out in force. 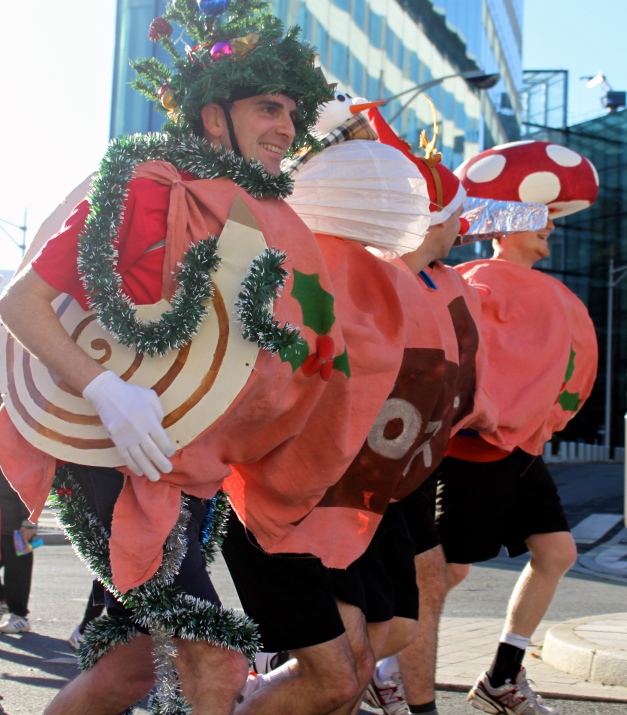 The bûche de Noël, absolutely the most hilarious déguisement of the day.

Yikes! I got flashed by Mrs. Clause. 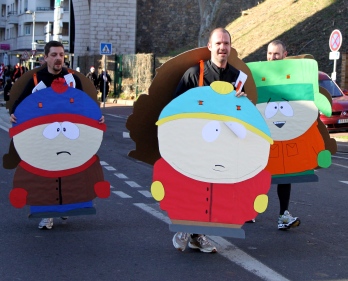 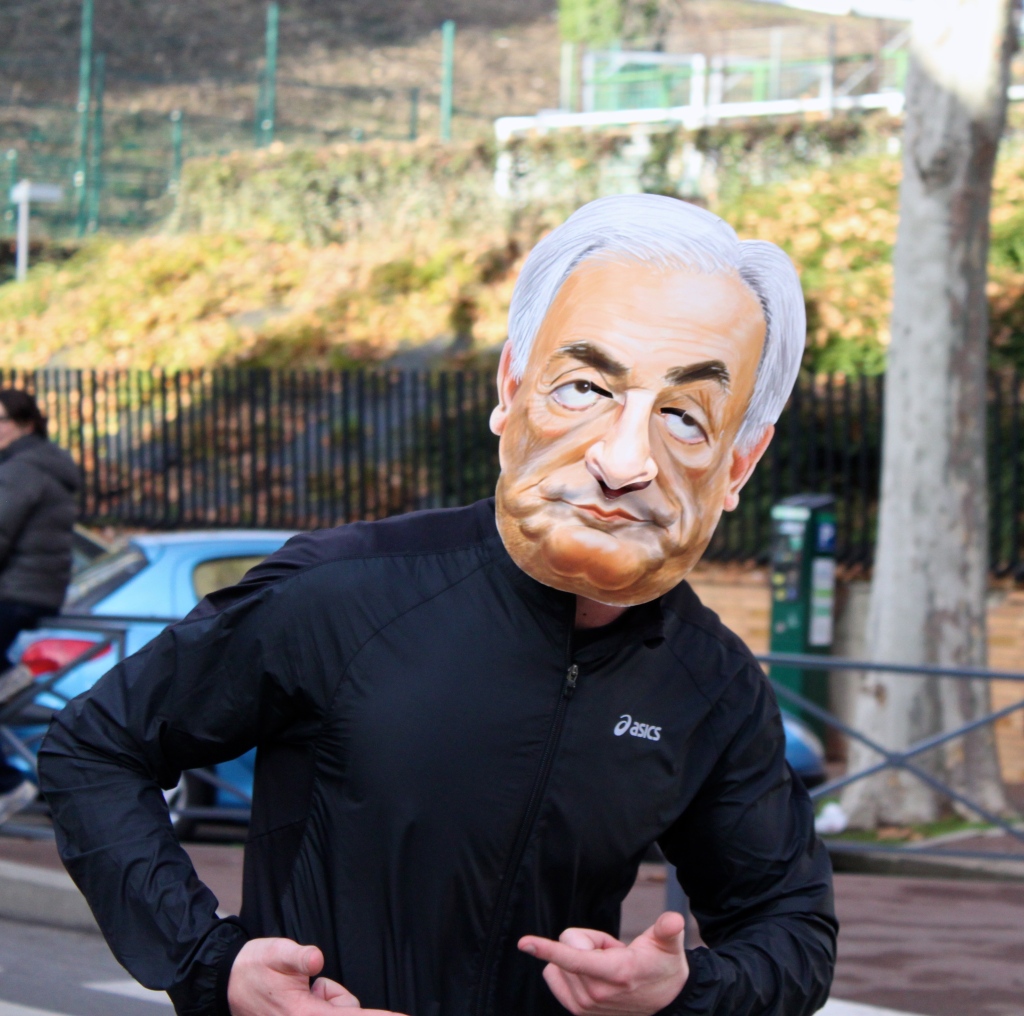 WTF? Still not quite sure what this was all about.

Now that I’m more in tune with the French (literally, I can finally understand a lot of what the French are saying to me…hurrah!), I keep hearing “un p’tit / une p’tite so and so”… Short, of course for un petit/ une petite.

While I, with my VERY literal grasp on français, find it an adorable habit to make nouns smaller than they actually are by prefacing them with the word “petite”, mes amies françaises have a slightly different take on it.

They seem to be of two minds, or perhaps I should say, they can see both a positive side and a negative side to their compatriots’ linguistic addiction to le p’tit mot “petit(e)”. 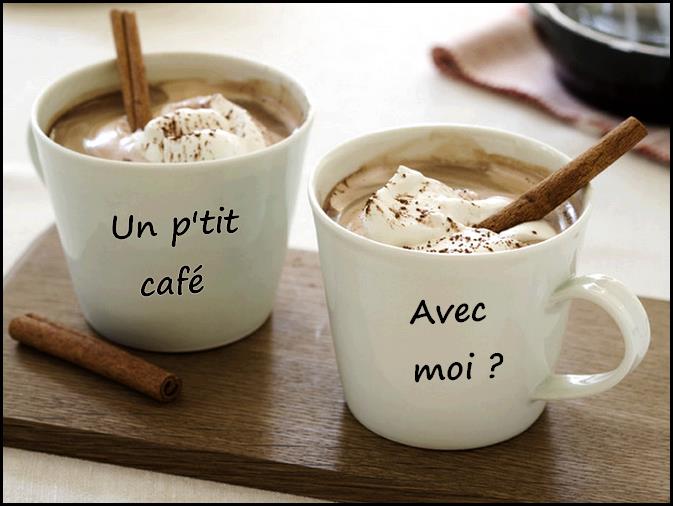 On the positive side, when used among close friends, or people you’d like to be close friends with, the word petite, indicates a “closeness” and not  a smaller size. For example, when you invite a few good friends to “une p’tite soirée” (a party), you are implying that it will be a warm gathering among close friends. Un p’tit café  with a friend implies an intimate catching up over coffee (not a tiny cup of Joe), where as an invitation to have un café with an acquaintance or colleague, is more in line with the business end of things.

Among friends you could share une p’tite bière, (beer), une p’tite blanquette de veau, (veal stew), un petit dîner (dinner), or un p’tit verre (a glass of wine). You could go for un p’tit ciné (a trip to the movies), on une p’tite ballade (walk), and, of course, un p’tit week-end, which the French adore. None of these things are necessarily reduced in size or length.

As a form of politeness you could ask your prof une p’tite question, or the cashier at the grocery store might ask for un p’tit signiture for your credit card bill. Both of which imply a certain reticence for disturbing you with a request.

But according to my French friends, the addition of the word petite also has a negative implication. They say that the word petite can be used to negate something that was actually a very pleasurable experience… lowering the bar and the value of a really enjoyable moment. Much as the French will almost always reply, when ask about their opinion of something, that it was: “pas mal” (not bad), rather than daring to articulate that is was pretty darn great, the word petite can take the wind from your sails, and imply that the glass is definitely half empty, and nowhere near full. That’s when un p’tit dîner detours from being a lovely dinner among friends, to a dinner that was pretty boring and hardly worth the time, or at least that’s what you want others to believe.

Mais moi, je préfère to go with the literal and positive translation. I like to imagine that when I’m invited to un p’tit restau (restaurant) that I will be dining in a tiny cozy café with my closest friends, drinking small beers and small glasses of wine and sharing tiny plates of food while laughing large and reveling in vast quantities of friendship.

Les virelangues are silly slogans we are supposed to speak swiftly, satisfactorily, and seriously to assess our skillfulness in successfully saying a succession of similar sounds succinctly.

Our assorted assembly of eight adventurers from across the earth, each with an array of atypical accents, histoires, et angst, ce n’est pas an attractive arrangement.

The mental and physical gymnastics we have to perform to suitably spit out these sentences is not only monumental, madcap and manic, mais also mirthful, meaningless, and modestly miserable. 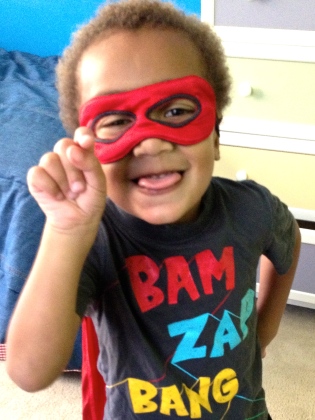 Batman tries to twist his tongue… 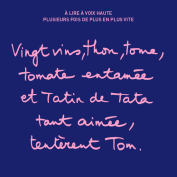 Oh, we try so hard! And French is not an easy language, but, alas, c’est une langue qu’on aime!

Here’s a sample of a few we’ve been working on…it ain’t pretty:

Dans ta tente ta tante t’attend. (In your tent your aunt is waiting for you.)

Ces six saucissons-ci sont si secs qu’on ne sait si s’en sont. (These six sausages are so dry that we don’t know if they are (sausages).)

Take a listen here to hear how hard these are to say! 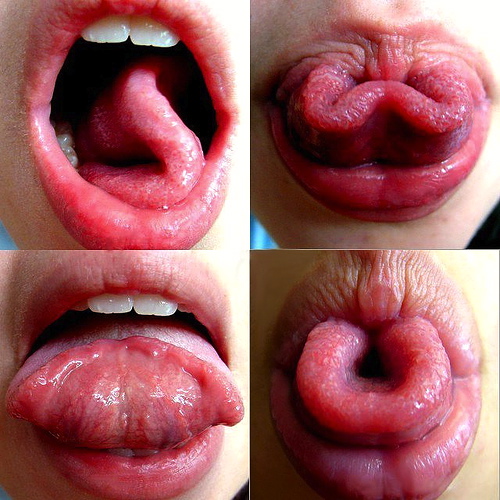 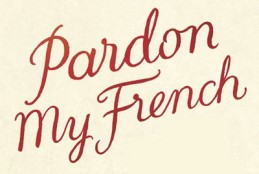 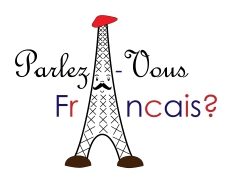 There are so many things I love about learning French. One of my favorite is the chance to collect the funny stories or ridiculous things foreigners say as we plod along in our language classes. It can get particularly silly in French.

Donc, over the past three weeks, I have been compiling a list of faux amis, or false friends, that my classmates and I have incorrectly used in our attempt to communicate with our prof. These are the words that look the same (or nearly the same) in French and English, which foreigners desperately throw into their conversations in hopes of being understood.

Although there are thousands of words that are true cognates or vrai amis in French, I’ve found that sometimes it’s better not to simply throw in the English word, and avoid feeling like un imbécile.

For example, it’s best not to ask an owner of a fruit orchard if she puts préservatifs in her jam, as I’m quite sure she hasn’t been adding condoms to her confiture. Better to say: conservateurs or agent de conservation.

When someone asks you to bring your baskets, don’t go looking for some nice wooden ones, better to head to the closet and pick up your tennis shoes/trainers.

If you are a single male at a bar, you might not want to start the conversation by notifying the ladies that you are un bachelier, unless you want to impress upon them that you did indeed pass the bac (the French equivalent of a high school degree.) Try célibataire instead.

Shopping for some lingerie or undergarments, please don’t ask where the bras are, or you could end up in the storage room with the spare mannequin arms.   Ask for the soutien-gorge instead.

When you go to vote, don’t expect to get un ballot, unless you want to hang out with the nitwits or nerds. If you want to make sure your vote is counted, see if they will rustle you up a un bulletin de vote.

Don’t ever ask someone if you can pet le chien, unless you want them to call the animal welfare agency to ticket you for thumping, beating, or passing gas on their furry friend. You’ll be better off if you simply ask if you can câliner or caresser the little guy.

When you come down with the inevitable autumn cold, don’t tell your prof that you can’t speak because you avoir la flemme, unless you are trying to tell him, “you really can’t be bothered” or you are “just plain lazy”. Rather explain to him that you have la mucosité in your throat.

If you are so sick that you have to go to the doctor, please don’t tell him that you have un pain in your throat, or he might spend the next 30 minutes rooting around for last night’s baguette. (Instead explain that you are mal à la gorge.)

And finally, when you are eating in a restau or café, it’s better not to ask the waiter for more napkins, unless you really need a couple of sanitary pads. Best to ask for une serviette. 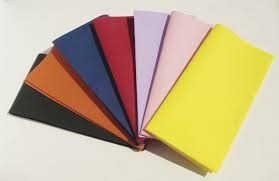 So, what are some of the funny Franglais conversations you’ve had with the French? Please send in your comments, I can always use a few more chuckles in my life.

célibataire: (to be) single

mal à la gorge: to have a sore throat

un bachelier: someone who has passed the bac (high school degree)

As I soldiered on with my intensive French course today, le prof decided to liven things up by presenting us with a list of insults / reprimands en Français. He taught us some good ones and they are so yummy, I just had to share them with you!

…in keeping with the food theme of last week’s French idioms, all of these insolent phrases continue to pay homage to France’s love of, and connection to, food.

Say for example, you are angry with someone, and you want to be more descriptive than simply calling him/her an idiot, you could say instead:

Espèce d’andouille! (You) piece of sausage!

Quelle nouille!  What a noodle!

Quelle poire!  What a pear!

If you want to tell someone to go where the sun don’t shine, you could say:

Want to tell someone to mind his own beeswax? Try this gem:

If you think your colleague is one twist short of a slinky, you might tell your boss:

Elle pédale dans la choucroute!. She pedals in the sauerkraut! 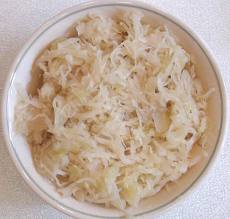 If you want to criticize a person’s looks you can handily compare them to some common food. For example, you could tell a woman:

Vous avez des oreilles en chou-fleur.  You have ears made of cauliflowers.

Have a friend who has become a bit pudgy around the middle? How about comparing him to a breakfast bun?

Il a de la brioche.  He has some brioche. (a potbelly)

Do you have a friend who is much taller than the average? You could always call him:

Oh, I love this tricky and vivid language! Please let me know if you have come across any other charming food-related insults (and if I have made any mistakes).

“Bizu: And now he’s pushing up the daisies.

Inspector Jacques Clouseau: He is not ‘pushing up the daisies,’ he is DEAD!

Inspector Jacques Clouseau: You, sir, are the idiom.”

I’ve just started an intensive French course, so don’t be surprised if November’s post are a bit heavy on new vocabulary and sayings. Today our class spent the afternoon learning about French idioms, particularly those with references to food. Et bien sûr, le French adore eating and cooking so it only makes sense that their language is flavored with the stuff meals are made of…

…here are some of my favorites:

Couper la poire en deux: to meet someone halfway; (to cut the pear in two)

Sucrer les fraises: to be a bit nutty; (to sugar the strawberries)

Se prendre une prune: to take a punch/hit, or get a speeding ticket; (to take a plum—perhaps the purple skin resembles a bruise?)

Tomber dans les pommes: to faint/pass out; (to fall in the apples)

Avoir la banana: to have a big smile; (to have the banana)

Etre la bonne poire: to be easily tricked/duped, to be too trusting (to be a good pear- ripe for the picking)

Avoir un coeur d’artichaud: to be tender-hearted, to fall easily in love; (to have the heart of an artichoke)

Ne plus avoir un radis: to have no money, to be broke; (to no longer have any radishes)

Les carottes sont cuites: it’s all over, nothing more can be done; (the carrots are cooked)

Mon petit chou: a term of endearment; (my little cabbage)