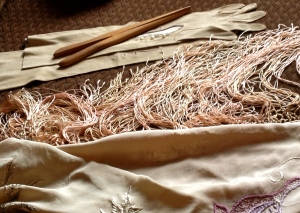 Only by interrogating the other passengers could I hope to see the light, but when I began to question them, the light, as Macbeth would have said, thickened.

If you are in Paris and you haven’t yet seen the intriguing Once Upon a Time the Orient Express expo at the Institut du Monde Arabe, make your plans now. Its final departure is 31 August 2014, 19h. France’s national railway (SNCF) and the Institut du Monde Arabe worked together to bring this real-life and cinematic legend to the public. Film enthusiasts and vicarious travelers get ready for a nostalgic journey on the extravagant train line. 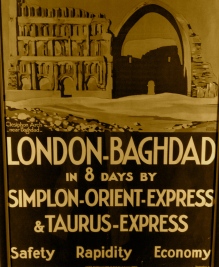 One of the finest exhibits I have seen, the detailed curators make it easy to imagine those first voguish passengers who boarded the luxurious liner in Paris in 1883 for their 80-hour journey to exotic Constantinople. The train oozes with the old glamor of courtesans and kings, duchesses and diplomats, spies and starlets, smugglers, tycoons, treasure hunters and rogues. It took nearly a year for SNCF to restore the 20th century locomotive used in the film “Murder on the Orient Express”, and they did not spare any expense. Visitors can marvel at the sheer opulence of the era that must have rivaled, if not surpassed, Europe’s finest hotels of the time.

The tour starts inside the Institute with vitrines filled with advertisements, travel documents, luggage and personal items and then continues with fully restored compartments and period clothing. After that you wander back outside to the Seine and board the lavish locomotive beautifully reflected in the institute’s glass-paneled walls. 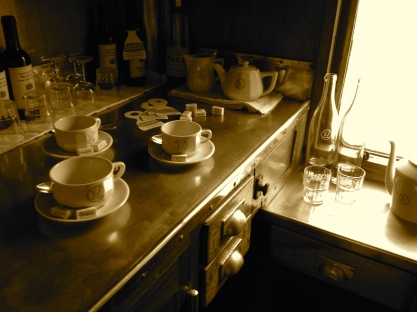 It is great fun to marvel at the sumptuous wooden paneled corridors and leather-covered ceilings, rich leather armchairs, art deco bars and other early 20th century excesses. The curators have meticulously included all the details: Harry Potteresque newspapers with photographs that come alive with scenes of the time, original china, cutlery, silk sheets, velvet curtains and personal items famous travelers brought aboard. 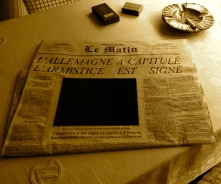 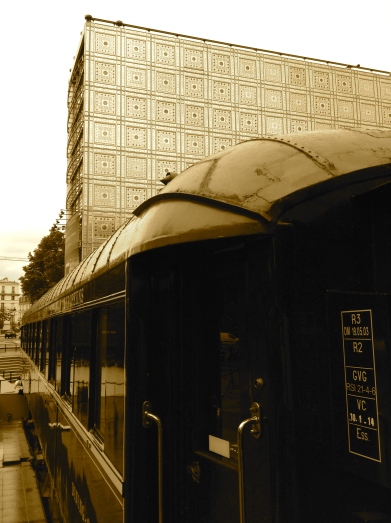 Look for the steam and listen for the whistle, two weeks left to clamber up the stairs and catch your ride on the Orient Express!