As I’ve mentioned several times in other posts, I do love the fact that living in France affords me the opportunity to not only visit the United Kingdom, but has also allowed me to make friends with a group of wonderful British women living in Paris. Interestingly I actually seem to fit in better with the British community and the other non-American expats than with my own kind.

Yep, one of the 365 things I love about France is indeed *les rosbifs. I find their humor and candor refreshing and of course, I love their accents. I like their worldliness and global perspective. I like that they provide a reality check on America’s place in the world. I like the fact that their national news is international. And, I love their vocabulary. Why be “great” when you can instead be “brilliant”?

Have a go at these few lines:

Having skived off work and legged it to his mate’s flat, they had a knees up with the neighbors and faffed around. The next morning feeling a bit wonky, the poor bloke was so knackered he had a kip wearing nothing but his pants. Even though it was monkeys outside when he woke up, he popped over to the chemist wearing only his pants and his mac to pick up some nappies, plasters, and bog roll. At least he wasn’t starkers. On the way back home a tosser of a lollipop man stopped him as a long parade of lasses eating fairy cake and candy-floss blocked the street. He thought to himself, this is “total pants”, but not wanting to whinge about it, decide to make the best of a bad situation and pop into a pub for a pint and some bangers and mash.

Have you lost the plot? 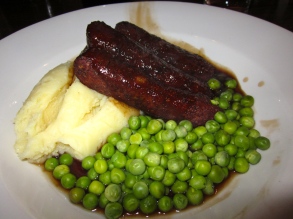 had a knees up: to go to a dance party

leg it: run or run for it

skive off: evade or avoid something

**les rosbifs: Calling a Brit a “roast beef” is a French insult in line with the Anglo insult “frog”. I believe it was originally a gastronomic term describing the English style of cooking beef. At some point in history, a French king sent a delegation to England to learn this specialize way of cooking meat. Clearly this was before the French became the culinary champions of the world.