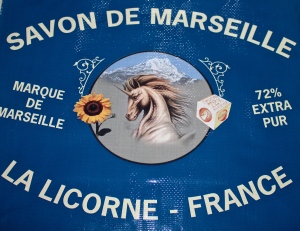 I love the world famous soap from Marseille. The authentic product is made from vegetable oils, mostly olive oil, and must contain 72 percent oil to be stamped as savon de Marseille.

Marseille and Provence have been associated with soap making since the 16th century. According to The Insiders Guide to the Most Beautiful Part of France, “in 1900, 60 percent of the population was involved in soap-making in some capacity and records from 1908 state that the city then had 81 factories producing 140,000 tons (308 million pounds) of soap a year.” That’s a tremendous amount of soap!

Being crazy for color, I love to look at the colorful displays of soap found at every market in Marseille and Provence, but as far as washing up, I go for the natural miel et citron. With no artificial colors or dye. It smooths and nourishes and smells heavenly to boot…