While flipping through my Food & Wine magazine in Colorado, I came across an article entitled The Ten Best New Restaurants in France. Much to my delight, one of the restaurants happened to be situated directly on our planned cycling route. Too good to be true, I knew it was meant to be. I decided to splurge and booked a table for two at Fontevraud le Restaurant, in the Abbaye Royale de Fontevraud not far from Saumur.

Located in the cloister, and one time prison, of Europe’s largest abbey, young chef, Thibaut Ruggeri, (only 34-years-old), and winner of the 2013 Bocuse d’Or (an international gastronomic competition), serves up extremely stunning haute cuisine in an intimate and peaceful setting. The tables surround a courtyard filled with fresh and colorful herbs where the very kind and attentive wait staff trim and pick fresh ingredients for each course.

No doubt about it, Chef Ruggeri is an artist. Visually his plates are exquisite. I’m not sure I’ve ever seen such beautiful and creative plating. Our dinner was like an edible trip to a fine modern art museum. In addition to the freshly picked herbs, the chef uses local ingredients, like honey from the abbey’s bees and mushrooms grown in the limestone caves surrounding the abbey. While not every plate was a homerun on the palate and flavor sometime took a back seat to art, it was an unforgettable evening. 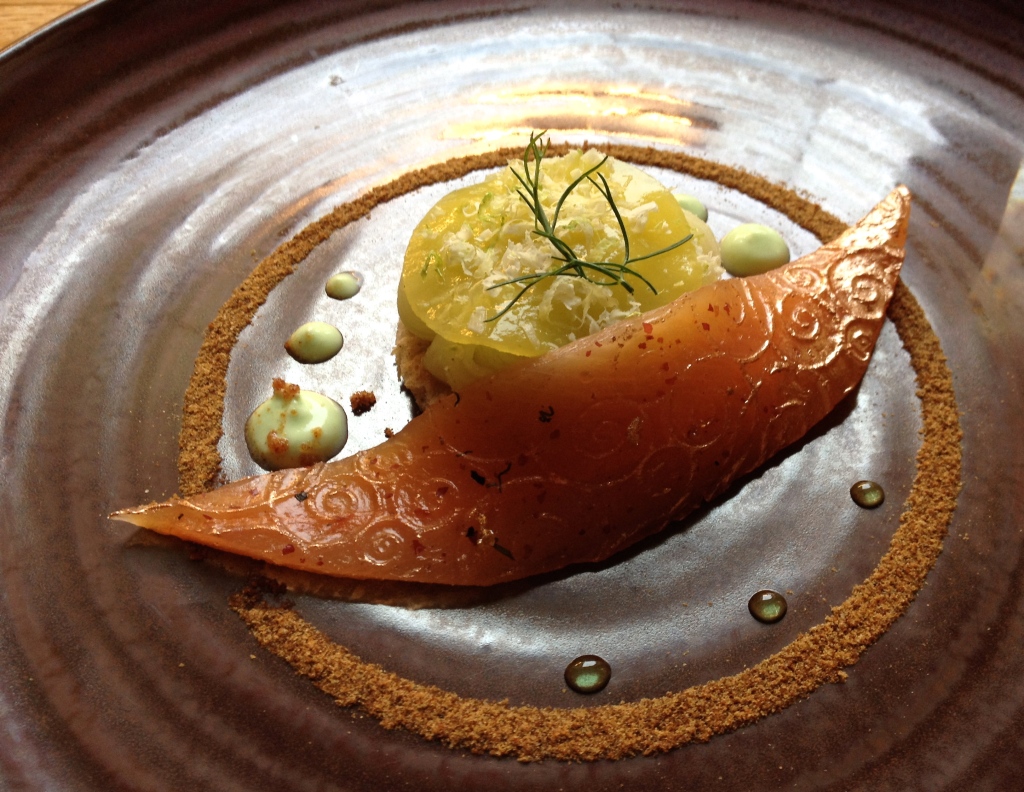 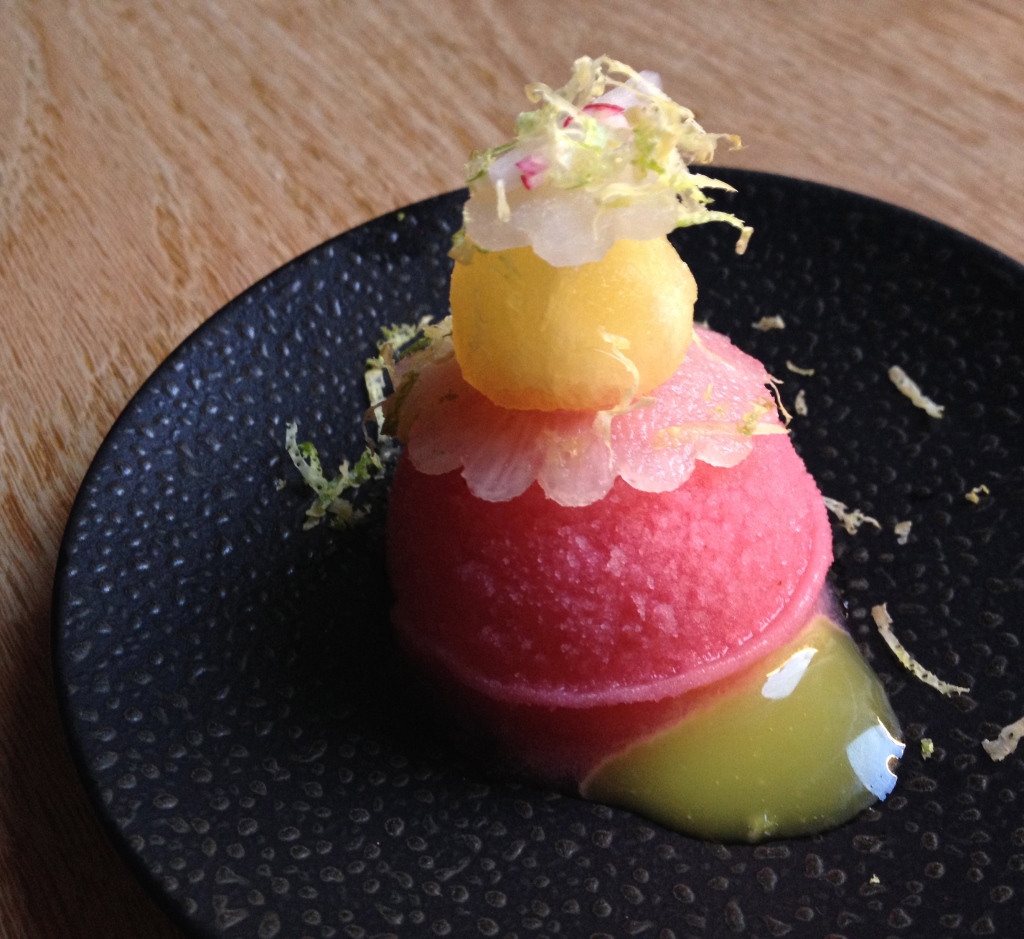 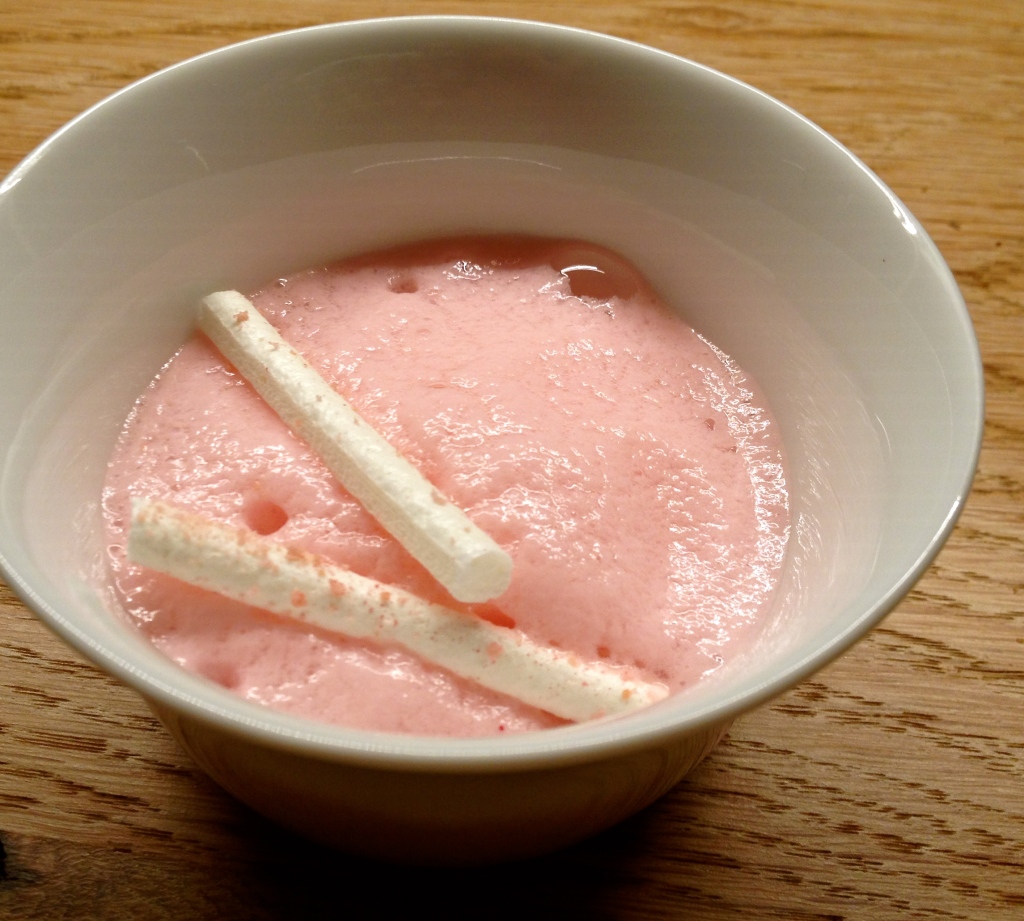 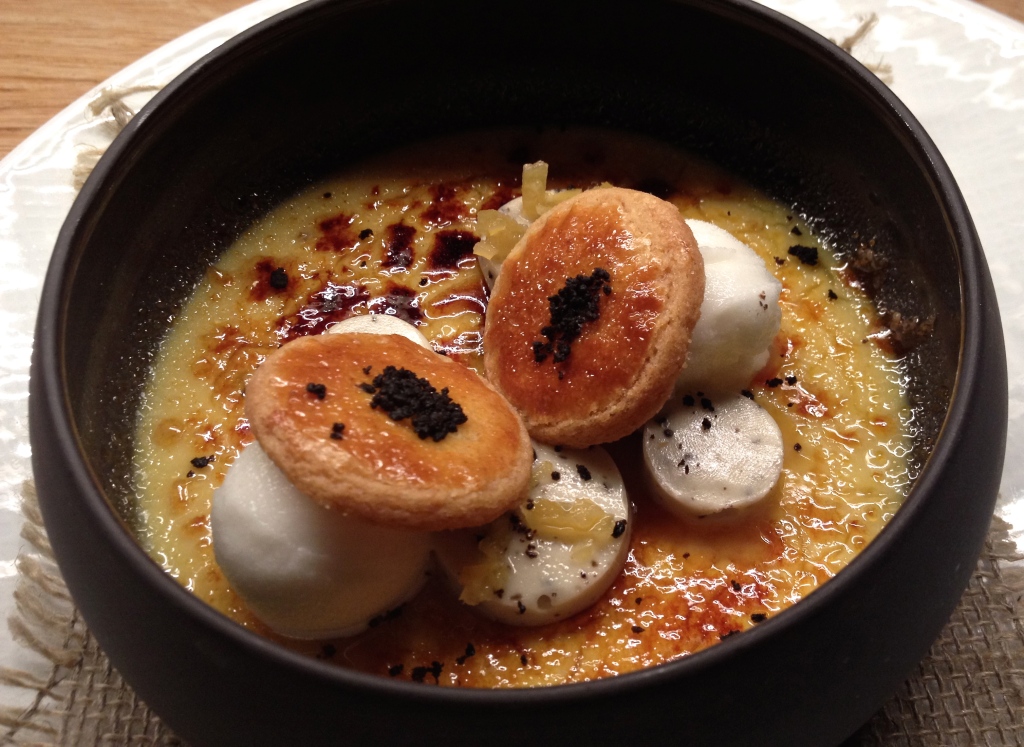 Chicken with mashed potatoes and lemon

Including wines in keeping with the meal \83€

A symphony of lemon and black olives

Including wines in keeping with the meal \ 130€

The Paris mushroom at Fontevraud

Poached monkfish with shellfish and striped with squid and squid ink with a braised fennel bulb and a dill and red wine sauce.

A pigeon fillet with almonds and covered with a cognac marzipan, honeyed carrots and giblets with 4 spices.

Cheeses from the length and breadth of the Loire

A little sweetness without butter or cream

A symphony of lemon and black olives

Our first day on the Loire à vélo was incroyable in so many ways.

However, as it is late and I’m exhausted, I will let the pictures speak for themselves.

The real story of the day lies in not what we saw, but with whom we saw it. It was a day to remember the value of friendship and importance of making time in our busy lives to spend with friends and family; because in the end those relationships make the ride worthwhile.

I was so touched that the French girls and my flexible and optimistic daughter, Kitcat found the time to ride 65 km with us along the wild riverbanks to the shuttered village of Baule, to the flower-filled city of Beaugency, to the country churches and finally to our friendly hotel in the shadow of the stately château in Blois.

The great thing about traveling with the French girls is, well,  they are French. And the French understand how to do a cross-country bike trip. They are really good at finding the beauty in the small things, and have no problem making a lot of stops along the way to make sure we see, smell and taste that beauty.

Bistros and cafés are key. They like their coffee (grand and with crème) and they like it in a sympa setting, preferably with some homemade crumble. 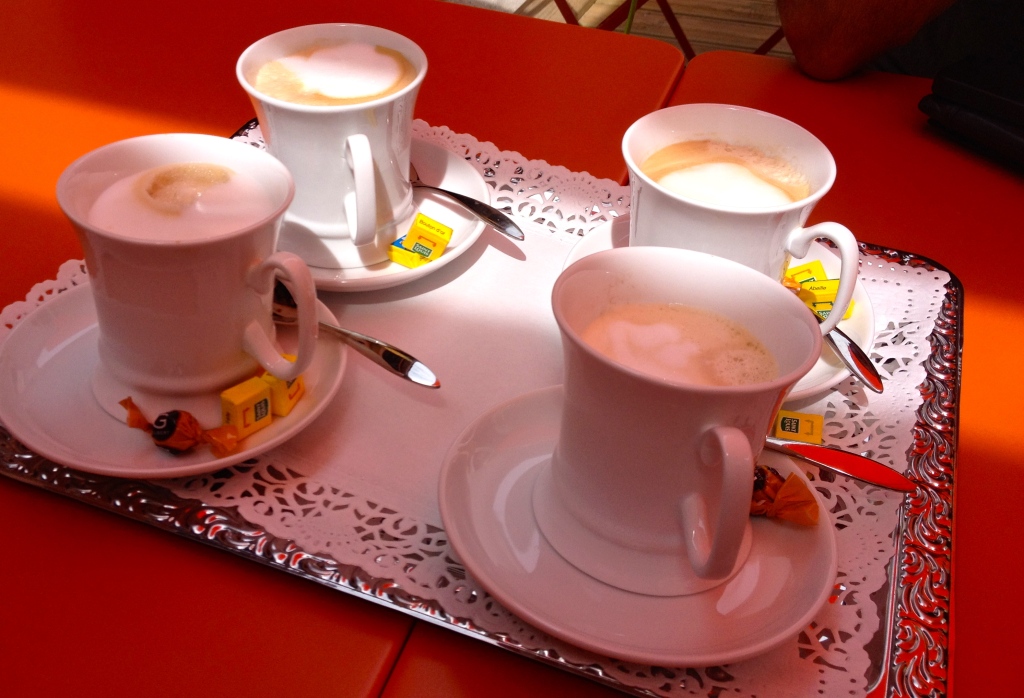 They also will go up some pretty steep village hills (even if they have to walk their bikes) in search of the one fantastic restaurant open on a Monday afternoon. Plus, when they are on vacation, they insist on having wine with lunch, and are quick to remind you that, “No, no, it’s good for you (as) we need a little sugar.” And that they “never drink at lunch, but (they) catch up when they can.” 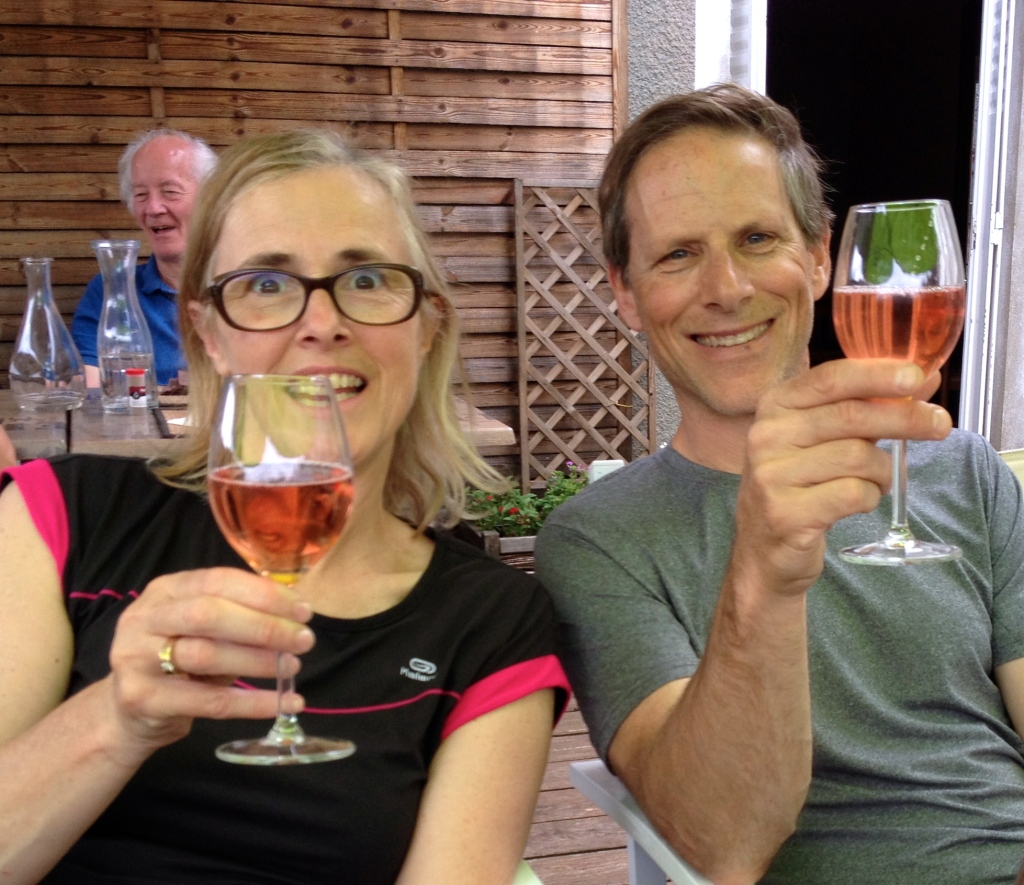 And after a hearty, relaxing meal, they hop back on their bikes (“Oh! Mes fesses!”) and ride for another 3 hours, all without having trained a single day for the ride. 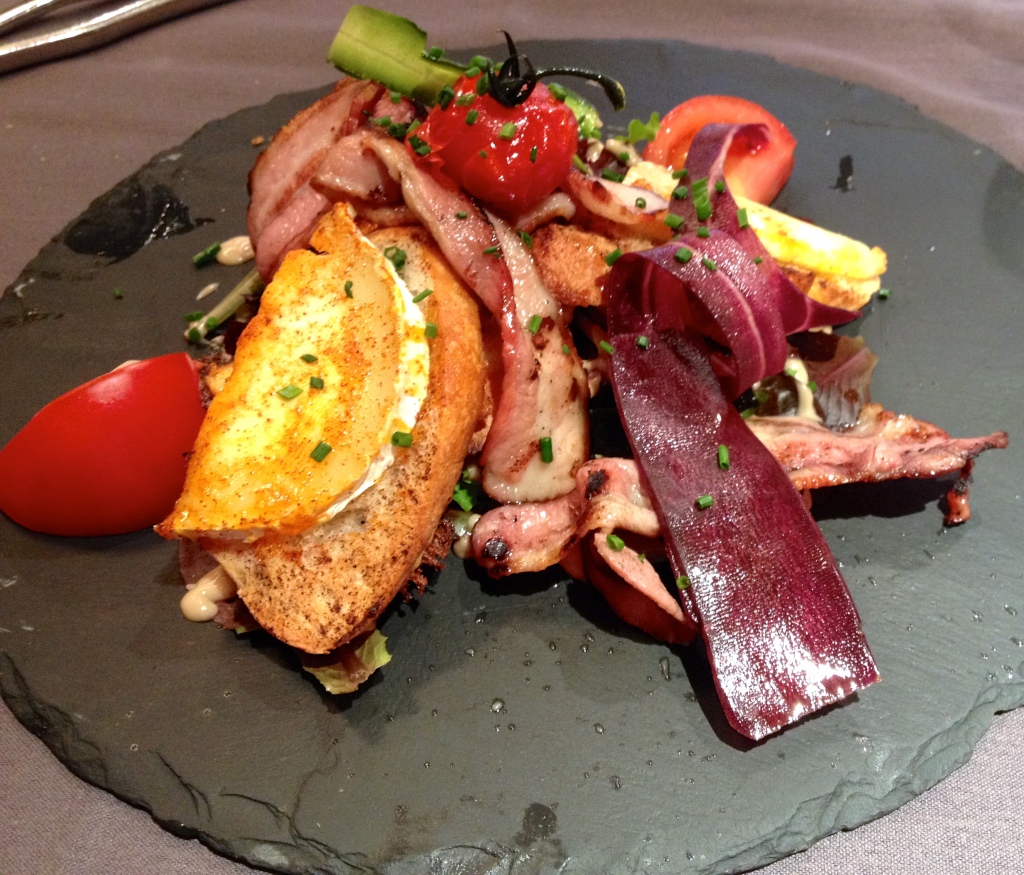 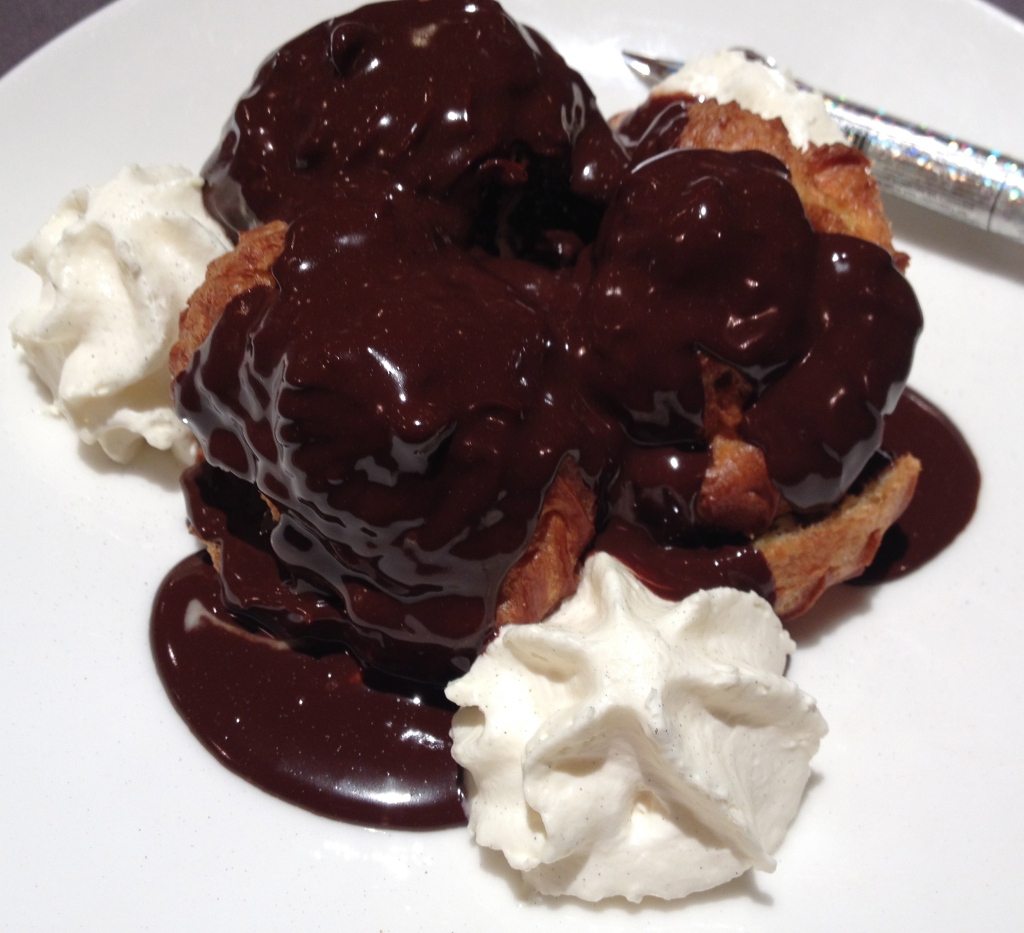 Marie-Françoise and Hélène are nothing if not optimistic. They are total goofballs, and full of smiles and beans. Nothing like the awful French we Americans are so scared we will encounter as we travel through France.

So, I am feeling like my Tour de la Loire is off to an awfully good start. And feeling very blessed to have such wonderful friends.

Since I am crazy for the ET or TE (tour Eiffel) as the French say, I thought I’d try my hand at making some at home with the help of a few little hands. They may not be as pretty as the ones you find in the shops, but they do taste pretty darn good, and were made with love. 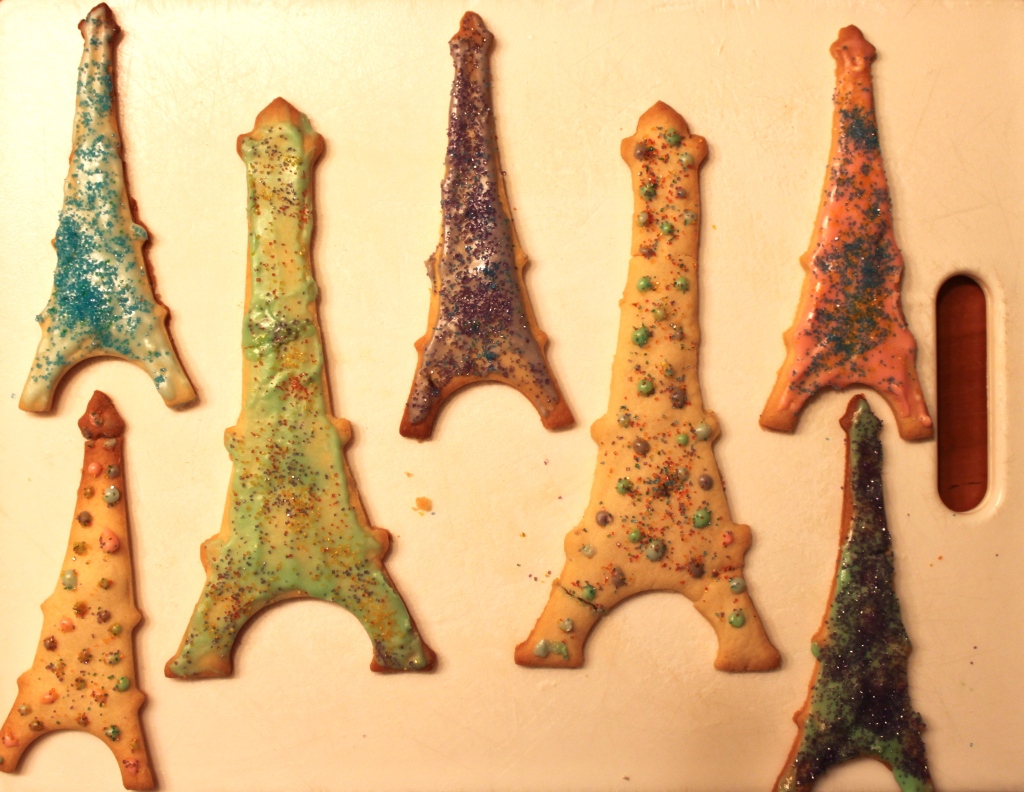 It was another rainy and cool day in Paris, making it the perfect day to serve up some pain perdu, lost bread as the French call it, or “French toast”, as we Americans call it.

The facts and history don’t seem to back up our anglicized name, as its origins date much further back than the foundation of a French state. En fait this delicious French dessert or American breakfast staple can be traced back to medieval times when the recipe (and I use that term loosely) first appeared to make inedible, stale loaves of bread more appetizing. Times were tough back in the day, and the masses could not afford to throw away any bit of edible anything, so the otherwise “lost” bread was battered, buttered, rescued and revived instead of being thrown out.

It doesn’t appear that the French were the first to dip their bread in a milky-egg mixture and fry it up. The English had their own versions (suppe dorate and tostees dorees) during the Middle Ages, and later a similar dish called “Poor Knights of Windsor”. There are even some “French toast” recipes traceable to ancient Roman times, which ironically, the French named pain a la Romaine (Roman bread).

It is also interesting that pain perdu was not just a meal for the poor man. Indeed the wealthy kept this staple on their menu too. Of course, the rich had their chefs make it to order, which meant only the finest white bread could be used—the crust cut off and discarded—before it was dipped in a mixture of beaten eggs, sugar and rose water, fried in butter or lard and topped off with more saffron and sugar infused rose water.

Like the medieval peasants, I also grew up making pain perdu with stale bread we could not afford to throw away. And boy, did my dad make a mean Sunday morning French Toast (and “Eggs Over Bread”), another poor man’s delight.

In France, I have learned that the best and most authentic way to make pain perdu is with day-old brioche (a lightly sweet bun or loaf-that the boulangers of France do so well), sliced thickly and dipped in eggs, milk, or better yet crème, seasoned with a little sugar and nutmeg, and gently fried in, what else, salted butter from Bretagne. 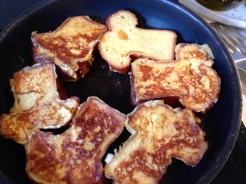 Here is a recipe for the “original” pain perdu, and please click the underlined links for my other favorite “lost bread” recipes along with my daddy’s famous Eggs Over Bread.

From: The Medieval Kitchen, Recipes from France and Italy by Odilie Redon (dated to 1450)

C’est délicieux! Que pensez-vous? It’s delicious. What do you think? 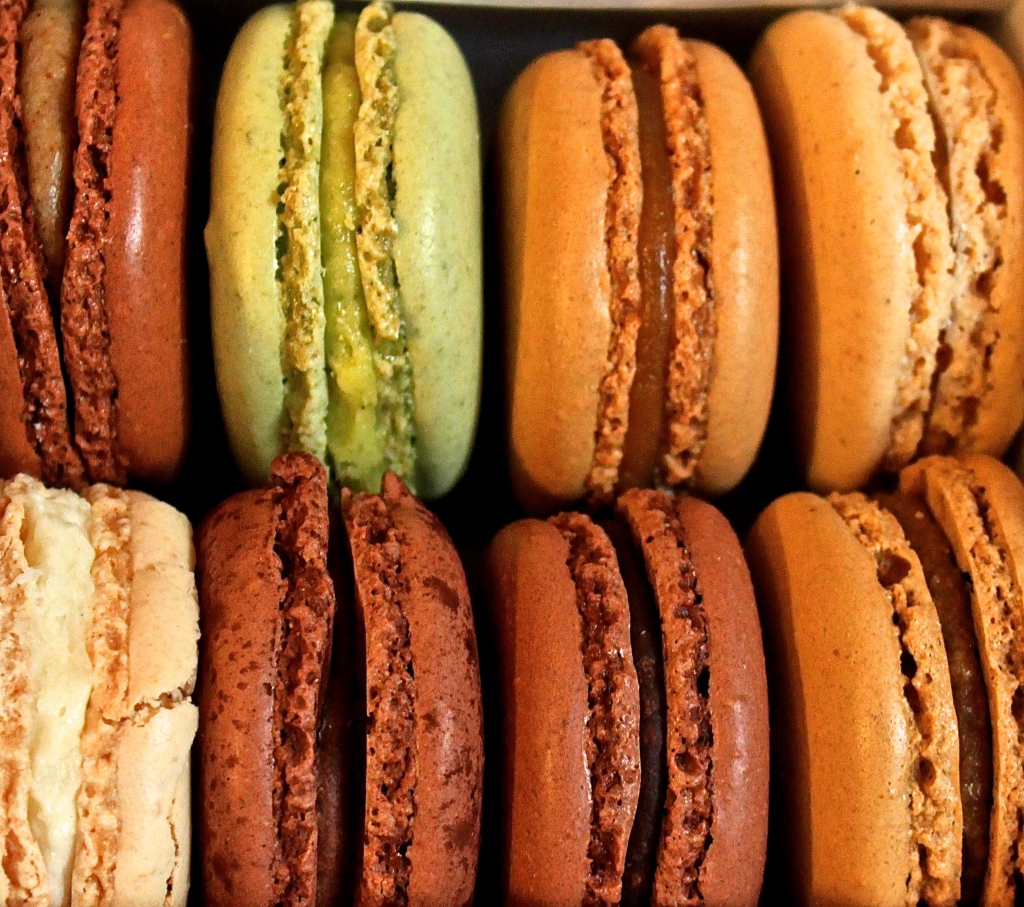 I love the French macaron. And to think, 4 years ago, I had never even heard of this whimsical creation. If you’ve never seen one, these charming double-deckered dots, look impossibly similar to multi-colored miniature hamburgers buns that you might find in your daughter’s dollhouse. They are gorgeous from top to bottom. 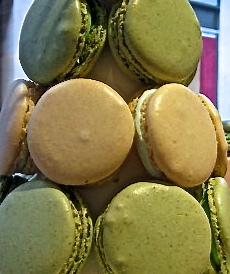 While I like the unusual and trendy flavors (this season Ladurée is featuring les baies roses—pink peppercorns) and the fanciful colors, when it comes to macarons, it turns out I’m a plain-Jane-vanilla kind of girl.  J’adore le parfum vanille—that, and the pistache.

During my time in France, I have probably eaten at least one hundred of these colorful, cream-filled confections. Don’t tell Superman, but at €2.25 a pop, that’s roughly $300 worth of cookies. It’s my guilty pleasure, so sue me.

There are several ways I like to eat them. I savor them in a cozy salon de thé with un café noisette, or depending on the flavors I order, a cup of chocolat chaud. I also love eating them on a park bench at lunchtime watching the world go by. Often I bring them home to the family as a special after dinner treat. This is my preferred method for enjoying les macarons. We usually share a box of 6-8, cutting them in quarters or halves, so we can all taste a bit of each. Sometimes I make the family close their eyes to try to figure out the flavor, other times I make them wait while I meticulously set them up for a photo shoot. I always suggest a sip of water to clear the palate between tastings. But the most important thing I have found to enjoy this indulgence is to make the time to relish every tiny bite…the taste, the smell, the texture and the view. Les macarons are scrumptiously edible art, exquisite and very, very French. 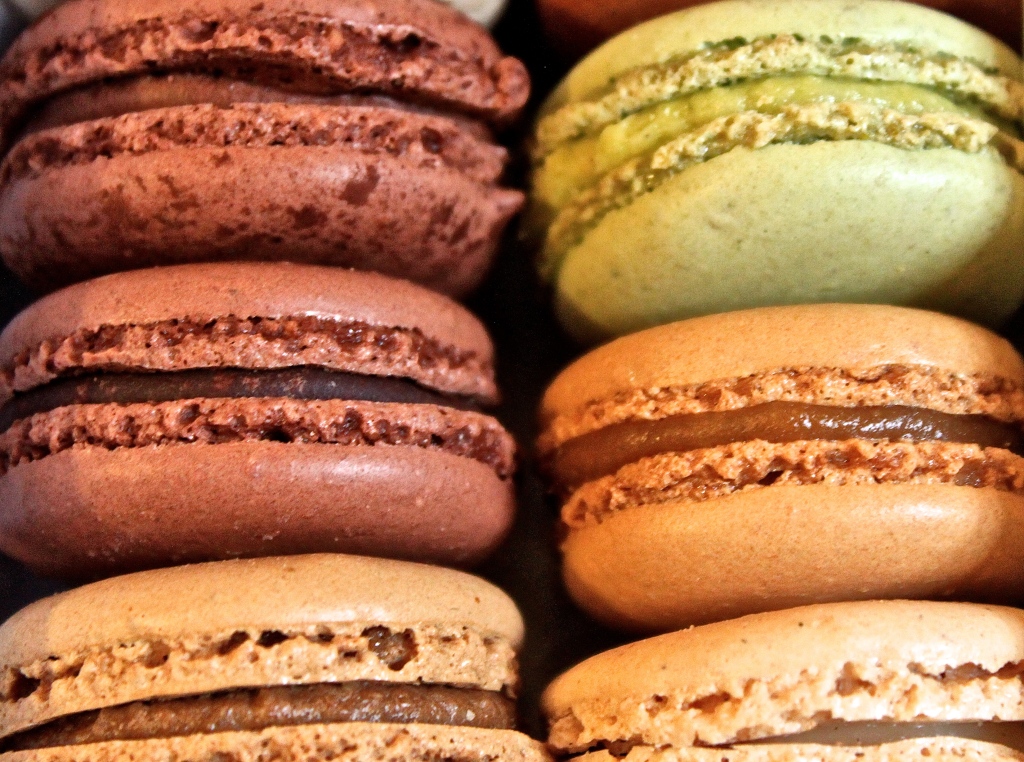 un café noisette: an espresso with a small bit of steamed milk

This sweet, low-key town in coastal Provence with soft-hued houses built at funky angles along the seashore is the perfect place to spend an uncrowded and uncharacteristically warm October day.  After a trip to the lively Friday market (filled with the French sweets made best in southern France: calissons, navettes, nougats, candied fruit and sugared almonds), we picnicked on a small-coved beach surrounded by dramatic walls of white limestone. The warm sun, gentle breeze and cooling sea mist were the perfect remedy for our grey-weathered Parisians souls. 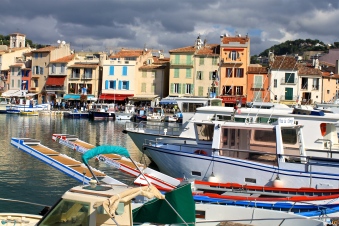 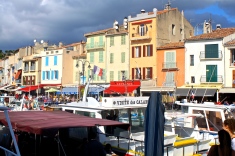 une navette: shuttle service, commute; also a Provençale cookie shaped like a rowboat and flavored with orange blossom, lemon, anise, almonds, chocolate chips and even lavender. For the recipe for these “sugar shuttles”, please click here.