France is sprinkled with cute little French towns. Well actually it is more than sprinkled, I think “slathered” might be a bit more accurate. It seems like once you leave Paris, the cuteness-factor goes up by about 100. The French do an outstanding job of flowering their hamlets, and as I have mentioned before, compete for the designation of les Villes et Villages Fleuris (Towns and Villages in Bloom) and the title of Les Plus Beaux Villages de France (Most Beautiful Villages in France). They are also quite keen to preserve and present the history of their centres-villes anciens. 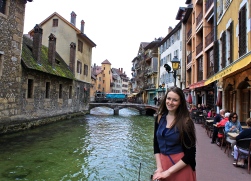 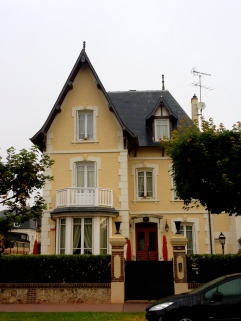 In 2013 the Huffington Post published their list of France’s 10 most charming towns. So far I have only visited two of their top-10, which thankfully gives me plenty of undiscovered villages to look forward to in the coming years. Les Plus Beaux Villages Association also provides their annual list, which you can find here—this year there are 157.

While I can’t say that I have been anywhere close to 150 French villages, I have been to my own fair share of small enchanting towns, and every time I turn a corner on my bike or by foot, I find myself smack dab in the middle of another one. And, it just tickles me pink.

Lately the half-timbered houses that add to the image of these fairytale towns have especially charmed my socks off. As these split-lumber dwellings seem to be everywhere I turn, I decided to do a little bit of research and find out how they are built.

It appears that French examples of these houses-of-charm dates all the way back to the twelfth century. Although the country was blessed with an abundant supply of oak, it was still an expensive building material, so most could only afford to use it for framing. According to medieval historians the term “half-timbering” refers to the fact that the logs were halved, or a least cut down to a square inner section. The fact that they used oak so long ago is an added bonus for us; its durability explains why so many medieval half-timbered houses are still standing.

While in modern framed buildings we installed the walls on the outside and inside of the frame, in the ancient half-timbered houses the walls were filled in between the structural timbers. What were they filled with? Why, wattle-and-daub, of course. In case this term is new to you, as it was to me, it was a mixture of different lengths of branches woven together and covered by muddy clay or bricks and sometimes plaster. (The best translation I could find for wattle-and-daub was clayonnage et torchis en français—ça marche? Native French speakers aidez-moi!) 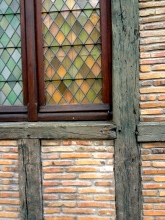 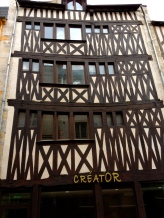 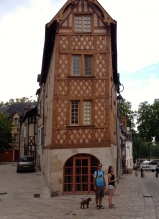 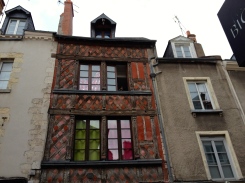 These days most of the surviving structures are extremely narrow and surprisingly tall, and packed together like sardines. This has to do with the taxing structure of the time where buildings were taxes on the amount of street front they took up. As time went on and living conditions improved, faux half-timbers were added as decorations to improve the facades of newer houses. The wobbly and slanting timbers and windows we see nowadays on the ancient buildings are not due to shoddy workmanship of the time, but simply victims of the passage of time and the expected buckling of aged wood.

So there you have it, a brief history lesson on the half-timbering that makes these little towns so darn adorable. C’est très charmant, n’est-ce pas? 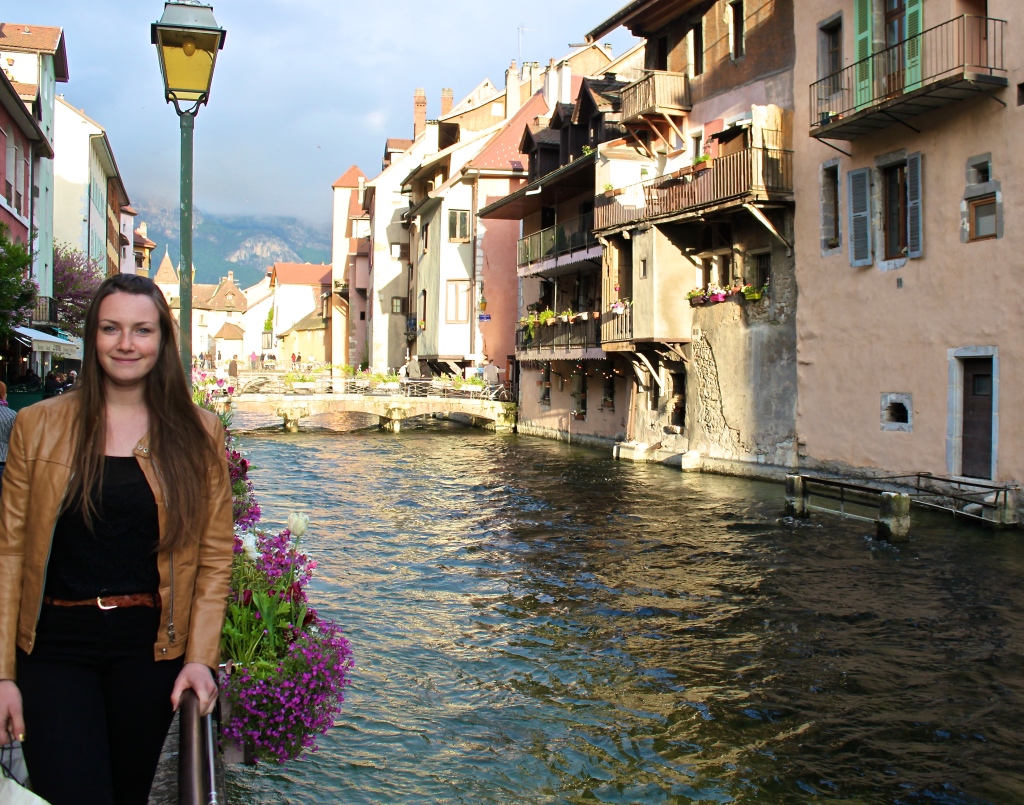 The closest I’ve been able to recreate my natural habitat of Colorado was a breathtaking late spring visit to the lakefront city of Annecy (pronounced: ahn-see) in the French Alps. The scenery is drop-dead gorgeous and travel brochure ready. It tops the mountainside towns of Colorado, say Vail or Aspen, because of its romantic canals, enchanting bridges, crystal clear lake, and its fondue savoyarde (Beaufort and Comté melted and mixed with the local Crépy wine, with an added splash of Cognac thrown in for good measure—c’est délicieux). 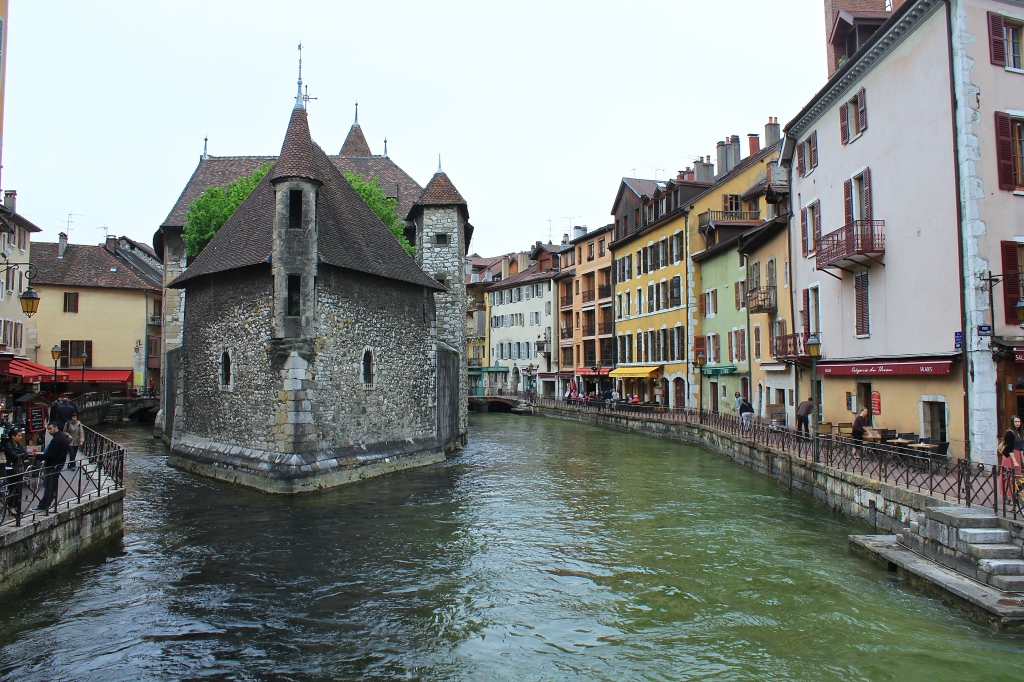 Often referred to as the Venice of France (un peu exagéré), it is actually a mix of several cultures, namely French, Swiss and Italian. The Swiss are represented in those adorable gingerbreadesque chalets—flower boxes and all, chocolate, wheels of cheese, raclette, tartiflettes, and all things cheesy that Switzerland does so well. The Italians make their mark with authentic wood oven pizza, mercifully light on the cheese, and the glut of mouthwatering gelato shops peppering the historic heart of town. 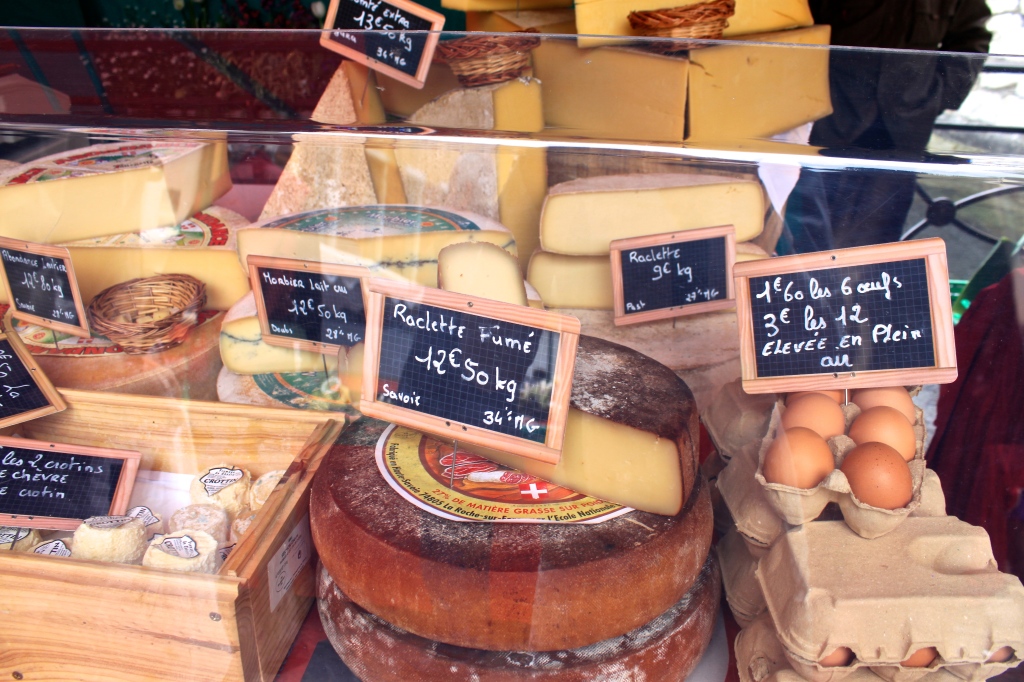 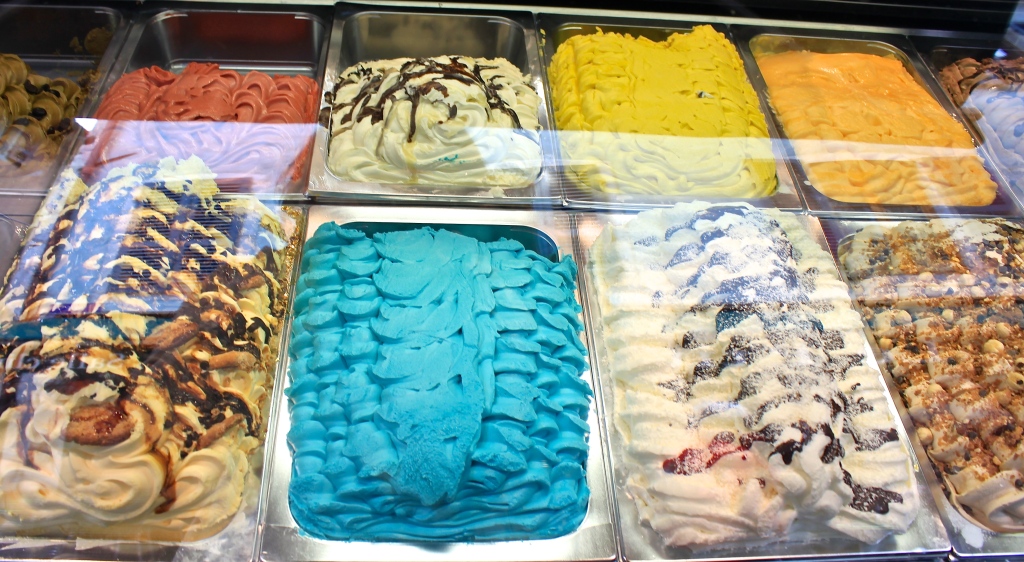 A nod to Italy: colorful and creamy gelato

Annecy is one of the most popular cities in France both with the French and with les étrangers, I wouldn’t necessarily recommend coming and staying here to get a way from it all. The throngs of tourists come to admire the beauty as well as be admired, and the traffic can be a nightmare. Early mornings are definitely the best and I imagine the off-season is delightful. That said, I would recommend staying just outside of Annecy (at any time of the year), and making day trips in, exploring the countryside, and hoping over to Geneva for a quick visit. We stayed in a gîte in one of the many hamlets that dot the landscape. Our gîte was amazing and cozy and starlit. In the middle of the woods, with quaint mountain roads to cycle through, a hot tub, a barbecue, and a huge yard for Tazzie to feel at home. Ça fait du bien par où ça passe ! 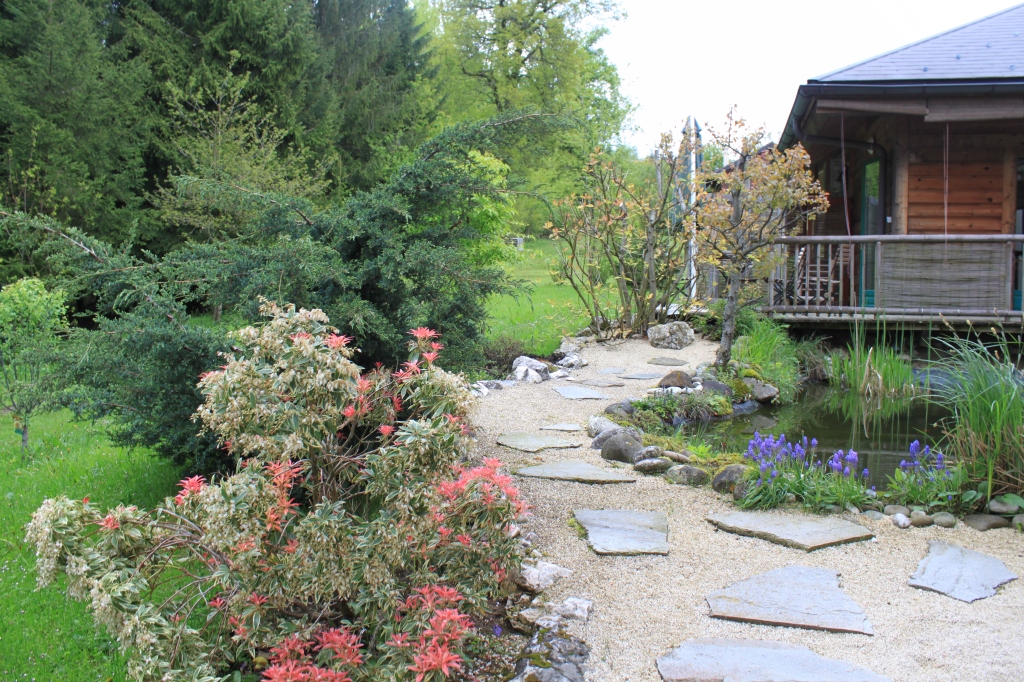 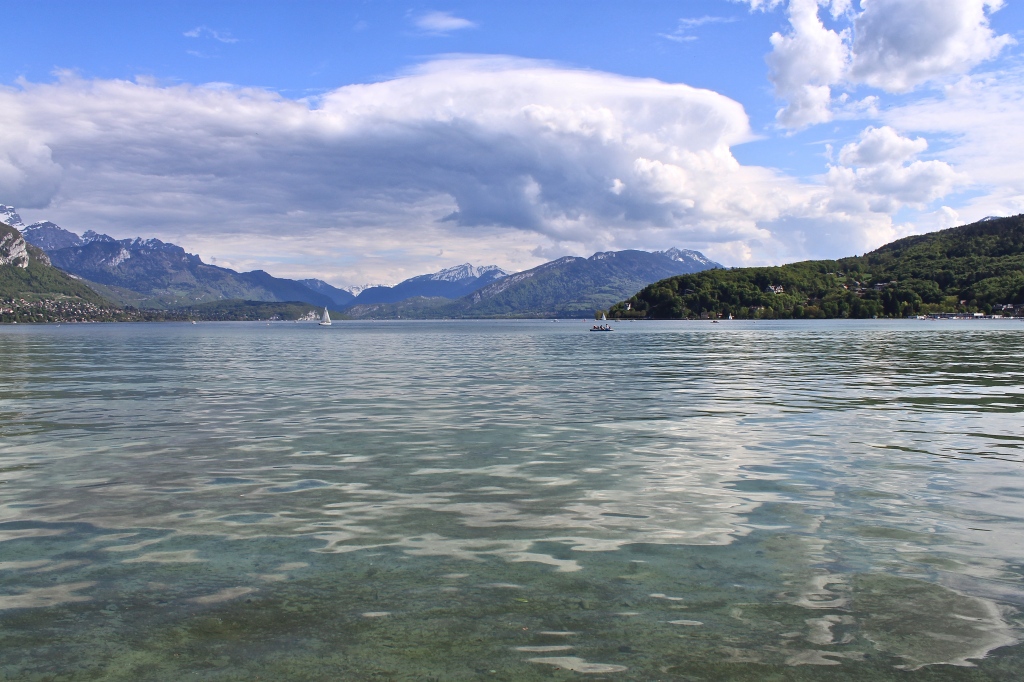 un gîte: a holiday home available for rent, fully furnished and equipped for self-catering, usually less expensive than other lodging

raclette:  a Swiss dish consisting of cheese melted over a fire and then scraped onto bread or boiled potatoes; also the cheese used in this dish